Experiments by researchers in the School's Centre for Science at Extreme Conditions (CSEC) have reached the highest ever recorded pressures on dense hydrogen, in excess of the pressures found at the centre of the Earth. 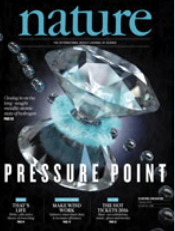 As reported in the prestigious "Nature” magazine, the study provides evidence that at above 350 GPa (3,500,000 atm) and at room temperature hydrogen adopts a novel structure. Interestingly the  results are suggestive that this new phase could prove to be the precursor to the long sought metallic phase of hydrogen, predicted over 80 years ago by theory.

As the simplest, lightest and most abundant element of the Universe, hydrogen is of fundamental interest in many fields of science. At high pressure and low temperatures, hydrogen is predicted to transform from a molecular system to a metallic (atomic) state. This behaviour is crucial to planetary science as hydrogen is believed to be found in the centre of Jovian planets and to be the source of their exceptionally high magnetic fields. This predicted state is also believed to exhibit rich phenomena such as superconductivity and super-fluidity, which would result in many technological breakthroughs. Reaching such conditions with hydrogen in the experimental laboratory however has been a great challenge in the field of high pressure research: only 4 years ago it was limited to less than half of the pressure recorded in the study.

Through new technological breakthroughs in the containment of hot hydrogen in diamond anvil cell experiments, Philip Dalladay-Simpson, Ross Howie and Eugene Gregoryanz at the Centre for Science at Extreme Conditions report that above 350 GPa hydrogen adopts a novel phase, phase V.

Tracking this transformation over a large pressure regime up to 400 GPa  and up to 450 K through Raman spectroscopy and comparing with theoretically predicted structures, the team suggest that phase V could be the precursor to the experimentally elusive, completely metallic and atomic phase of hydrogen. The work will undoubtedly reinvigorate both theoretical and experimental efforts to understand these newly discovered phases and hydrogen’s evolution to a purely metallic (atomic) structure.

"The past 30 years of high-pressure research saw numerous claims of the creation of metallic hydrogen in the laboratory with the latest being made in 2011, but all these claims were later disproved. Our study presents the first experimental evidence that hydrogen could behave as predicted, although at much higher pressures than previously thought." Prof. Eugene Gregoryanz, Centre for Science at Extreme Conditions