Suspensions can exhibit a wide range of rheological behaviors such as shear thinning, shear thickening, and normal stress differences. These behaviors are closely linked to both the bulk particle structure as well as the microstructure including direct particle contacts. Traditionally, localized parameters such as the coordination number and pair correlation function as well as larger scale measures such as the average floc size and fractal dimensionality have been used to analyze the structure of these materials. While these parameters can correlate to the measured rheological response, their application is often of limited use, e.g. fractal dimension for sparse networks. Graph theory offers other methods and parameters that can be used to analyze complex structures. This effort is aided by advances in confocal microscopy and computational simulations where direct information about the particle positions and bond strength are accessible.

This method is demonstrated using ternary liquid - liquid - solid systems , which exhibit a wide variety of different morphologies depending on the ratio of the three components , as shown in Figure 1 . Here, w e investigate micro structural properties and transitions as the volume ratio of secondary fluid to particles, φ sec / φ solid , is changed , where a transition from a granular system without added liquid, through a sparser capillary suspension network at intermediate volume ratios, to a network of dense aggregates at larger ratios can be observed . Given the diversity in structures, we analyze these networks using the coordination number and clustering coefficient , where the difference is shown in Figure 2 . The clustering coefficient is a measure of the clique - ishness of a network and should correspond to the rigidity of these structures , whereas the coordination number just counts the number of neighbors regardless of their configuration . We compare these parameters with the measured storage and loss moduli for these ternary suspensions and suggest other measures that can be used to analyze the networks. 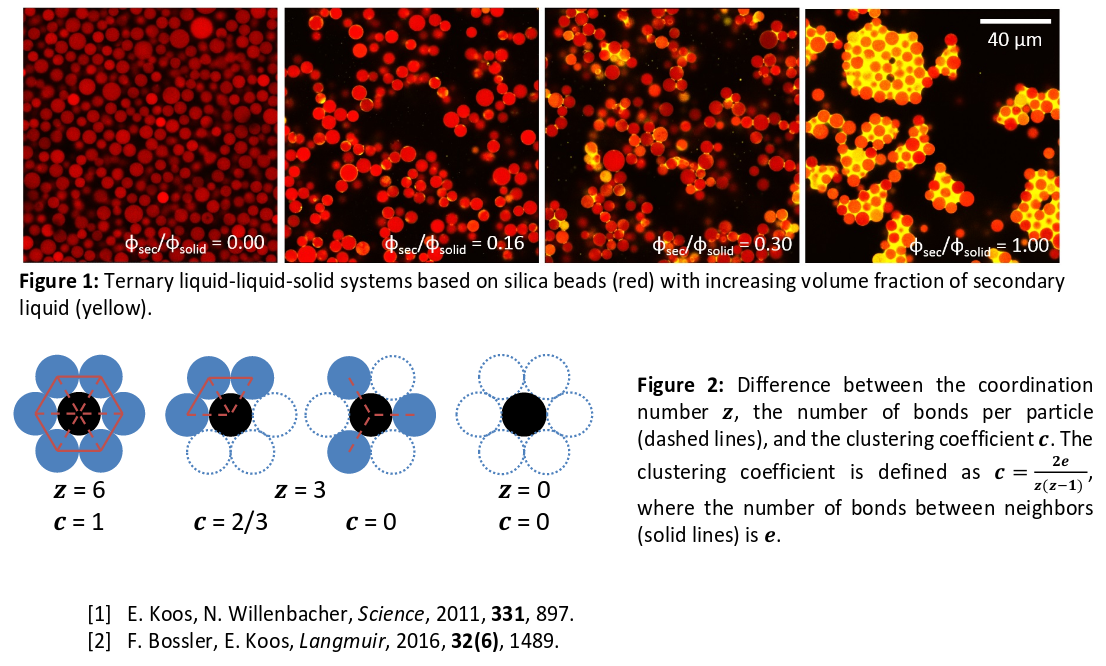 This is a weekly series of informal talks given primarily by members of the soft condensed matter and statistical mechanics groups, but is also open to members of other groups and external visitors. The aim of the series is to promote discussion and learning of various topics at a level suitable to the broad background of the group. Everyone is welcome to attend..