High-precision mass measurements and decay spectroscopy give an insight into the variation of the nuclear structure and stability across the nuclear chart. Systematic measurements along isotopic chains and the observed shell structure of nuclei, reflected by increased binding energies at the so-called magic neutron and proton numbers, led to the development of the current shell model. From precise mass values, important differential quantities, such as the proton and neutron separation energies can be calculated, which highlight different nuclear structure effects. Decay spectroscopy utilizing beta, gamma or neutron detection allows for in depth investigations of the internal level structure of exotic nuclei.

Approaching the limits of nuclear binding, the structure and properties of nuclei is of great interest and attracts large attention, theoretically and experimentally. It has become evident that the nuclear shell structure, once thought to be impeccable, can change towards the proton and neutron drip-lines. New effects such as shell quenching, weakening or disappearance of shells around the classical magic numbers and appearance of new magic numbers have been theoretically predicted and observed in experiments. One of the best studied examples are the N=20 and N=28 "island of inversion" where the normal level population according to a spherical mean field model is overcome and as a result the traditional N=20 and N=28 shell closures completely disappear. 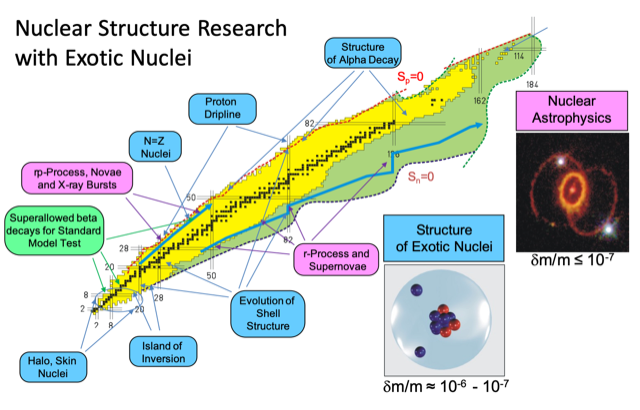 Mass measurements for the evolution of nuclear shells

In our previous work we investigated the evolution of the N=32 neutron shell closure, that forms in neutron-rich Sc, Ca and K isotopes. Here we performed mass measurements of neutron-rich Ti and V isotopes at TITAN (TRIUMF, Canada) with a new multiple-reflection time-of-flight mass-spectrometer (MR-TOF-MS) in combination with the established TITAN Penning Trap system. The new MR-TOF technology has shown to be particular suitable for low count rate measurements of short-lived isotopes with relative uncertainties on the ~ 10^-7 scale, sufficient for nuclear structure and nuclear astrophysics investigations.

Our direct measurements, together with new state-of-the-art ab-initio shell model calculations, showed the transitional character of Ti, between “no shell effects” and “strong shell effects”. The results challenge modern ab-initio theories and serve as an excellent testing ground for new shell model calculations. We plan to exploit the new experimental capabilities and push towards an investigation of the N=34 neutron shell closure, currently under discussion in Ti. Further we aim to expand our studies across the mid-shell region between the proton shell closures at Z=20 and 28 along the neutron-rich side of the nuclear chart. On the other side of the nuclear chart, we investigate the evolution of the N=82 neutron shell closure on the neutron-deficient side.

Mass measurements of very neutron-deficient Tm and Lu isotopes allow a determination of the proton drip-line, where the one proton separation energy becomes negative and isotopes further away from stability only exist as resonances, making them particular short lived. Using mass spectrometry techniques, we can perform measurements of these short lived ( ~ few ms half-life) isotopes beyond or close to the proton drip line. 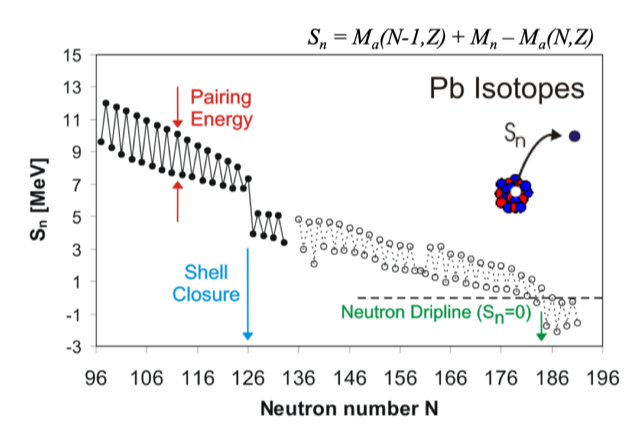 The region below 100Sn, following the N = Z line has been established as a rich playground for testing our understanding of nuclear models for decades. Here protons and neutrons fill the same orbitals, which leads to interesting phenomena and allows to investigate nuclear forces and symmetries, proton-neutron interactions and other exotic nuclear structure effects. Nuclei with N ~ Z provide an excellent basis for studying the interaction between protons and neutrons (np-interactions) in nuclei. The empirical np pairing is dramatically increased in the experimentally known N = Z nuclei. The enhanced binding energy of these N = Z nuclei is often referred as the Wigner energy.

Despite the intense work in this region, many N = Z nuclei have not been experimentally measured. Here we work with the In-Flight facilities GSI (Germany) RIKEN (Japan) and Argonne (USA) to perform mass and decay spectroscopy of the most exotic nuclei. At GSI we are part of the FRS Ion Catcher experiment; a high precision mass measurement experiment using stopped and thermalized radioactive ion beams from the FRS fragment separator. Masses are measured using a well-established MR-TOF mass spectrometer coupled to a cryogenic stopping cell.