Quantum Order refers to correlated states of matter that have a quantum origin, including different forms of superconductivity, magnetism, ferroelectricity, and topologically protected states. Many of these states emerge at low temperatures where quantum effects become more pronounced. Many also require pure single crystals. We grow our own crystals, which allows us to lead the hunt for new forms of order, which we study down to very low temperature and in high magnetic fields in-house and at central facilities with neutrons, X-rays and muons.

Our research covers a wide range of condensed matter subjects.

As well as studying states that are already known, we are particualrly interested in looking at new materials that we believe may host completely different ground states. An example of a new state that no-one has made to date is a special form of superconductor that hosts half quantum vortices.  The latter have special topological properties that could be exploited to make a robust quantum computer.

Where do you look for such new states? One answer is look close to the point that the critical temperature for a continuous phase transition between two uniform states is driven to zero kelvin, known as a qunatum critical point. At zero kelvin the entropy is zero and any change of state has to be brought about by quantum rather than thermal fluctuations. The large quantum flucutations provde the mechanism for new state formation.

Theoretical work to understand the physics close to quantum critical points has been fuelled by a number of recent experimental discoveries.  In our own work we found an unusual form of superconductivity homogeneously co-existing with ferromagnetism.

Below we detail a number of specific research interests. 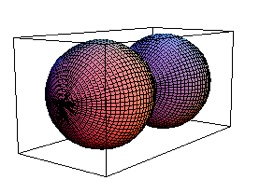 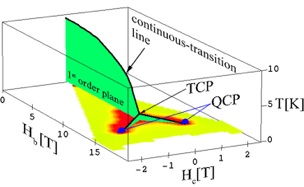 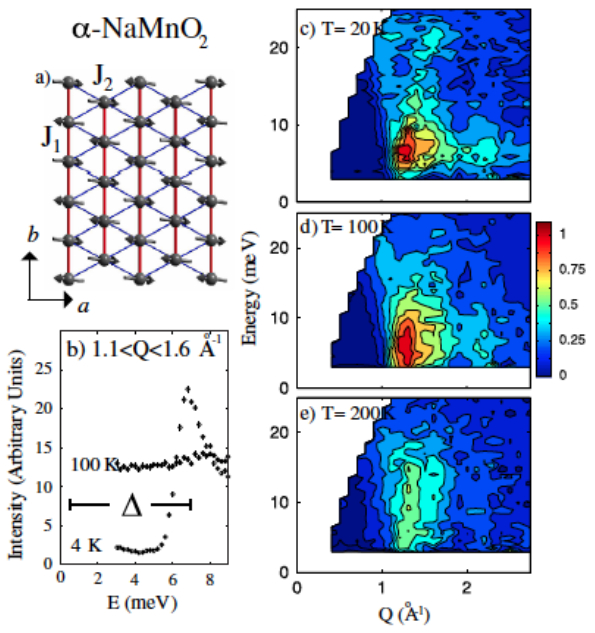 Topological defects represent a localized region where the otherwise uniform order parameter approaches zero. While the introduction of defects typically degrades materials, there are several notable examples of systems where defects enhance the properties. One example is the case of disordered piezoelectrics. Piezoelectric materials are systems where the shape and strain in the compound can be controlled directly through the application of an electric field. These systems are often used for sound detection (such as sonar) or even microscopy where small controlled displacements can be performed. In some piezoelectrics (containing lead) the introduction of defects through chemical substitution can enhance the electromechanical coupling several orders of magnitude improving the materials properties. Understanding the role of defects and the ability to control them can be an important factor in controlling or engineering material properties. The group is involved in the study of topological defects in a number of systems including frustrated magnets, ferroelectrics and piezoelectrics, and strongly correlated electron systems.

Crystal quality is of prime importance for the study of many correlated electron phenomena. In particular non-conventional superconductivity is only possible if the electron mean-free-path is longer than the superconducting coherence lemgth. We therefore have developed in-house apparatus for growing and conditioning crystals of the required quality. We can make the best crystals worldwide of many of the materials we study.

We have an extensive range of specialist crystal growth equipment. This includes ultra-high vacuum RF induction heating, a Czockralski crystal puller, ultra-high vacuum annealing furnace and controlled atmosphere conventional furnaces. The most recent additions are a drop casting furnace and two systems for solid state electro-transport. The image shows a crystal being puller from a levitated melt in the RF furnace. 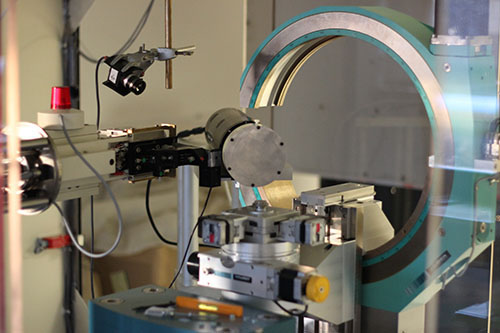 Many experiments require single crystals with a well defined geometry. We therefore need to be able to orient and cut crystals for our measurements as well as check their structure.

We have a Laue X-ray camera with image plate reader for orienting and checking samples. We also have built a Laue scanner for mapping the grain distribution and mosaicity across a specimen. Oriented single crystals are cut with spark erosion. A new micron precision apparatus optimised for very low sample damage is being set up. We also have use of shared facilities for X-ray structural studies of single crystals and powders in CSEC. Electron microscopy capability is also avialable at the King's buildings.The image shows our Laue scanner. 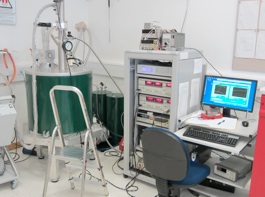 The superconducting magnet has a wide bore that accomomdates pressure cells and we have built a two axis rotator that allows pressurized samples to be rotated to any angle in situ (pictured). This is particualry useful as many of the proporties of interest are strongly anisotropic, some requiring alignement of the magentic field to the crystal axis within a few tenths of a degree. The cryostat is also equipped with optical windows. It is cooled with a pulsed tube cooler that runs continuoulsy without the need for tedious filling with liquid helium.

We also have use of a number of shared facilities for magentisation (MPMS) and heat capacity (PPMS) measurements. These are easy to use commercial instruments. We have developed small pressure cells that allow measurements on pressurised samples in these.

Finally we have two CCR's, one with optical axis for development work. 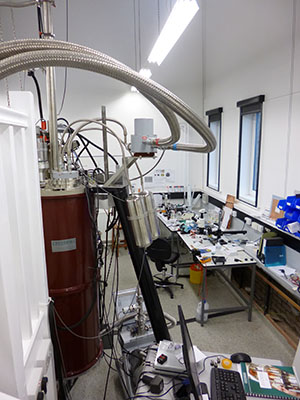 Non conventional superconductivity and quantum critical behaviour are ultimately studied at sub Kelvin temperatures. We have two dilution refrigerators for these studies. The first is an Oxford Instruments Kelvinox 400 located in St Andrews (where there is a helium liquifier). It operates down to below 10 mK and is equipped with a wide bore 17 T superconducting magnet, equipped with modulation and gradient coils, SQUIDS (which give the ultimate sensitivity and signal to noise for many measurements), and sample rotation. Our second dilution refrigerator (made specially by Cryogenics/Leiden Ltd) does not consume liquid helim and was installed in Edinburgh in 2014. It cools down to 15 mK and is equipped with 14 T magnet. It is designed for rapidly changing samples through an airlock. A two axis rotation platform is on order. We use both sets of apparatus for a variety of measurements. These include magentisation and torque magnetometry, thermal transport, electrical transport and heat capacity. As well as giving infromation on for example the symmetry of the superconductivity, minute quantum oscillations in many of these quantities with magentic give detailed infomration on Fermi-surfaces. The new dilution refrigerator is shown in the image. 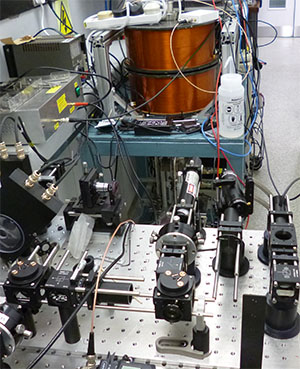 One of our more adventurous measurement developments is the construction of a magento-Kerr microscope. The Kerr effect (discovered by the 19th century Scottish physicist John Kerr) is the rotation of the polarisation of light on reflection. It is a very sensitive probe of time reversal symmetry breaking and therefore of magnetism. More recently it has been used to probe much more subtle phenomena from minute circualting currents that occur in some forms of topological order and some types of superconductivity.

We are developing a microscope for imaging the Kerr roatation over a sample surface. One objective is to image the position of magentic and other domains at low and very low temperature. Since defects (such as vortices in a superconductor) may have a different topological character at domain walls a first step is to map the wall locations. A second step will be to image the vortices themselves. The image shows an optics breadboard which forms part of the microscope (the test platform and CCR are visible in the background).

Neutron and x ray scattering are performed at large scale facilities. We use of a variety of reactor and accelerator based spallation sources in the UK, France, Germany, and the United States to spatially image the magnetic correlations in materials.