We study how materials react and change when being subjected to extremes of pressure, temperature, fields and strain. We use diamond anvils or large lasers to create high pressures, liquid He cooling and laser heating to change temperatures, and x-rays, neutrons and optical spectroscopy to study how the materials change. Understanding our observations is aided by computation and simulation, using methods such as electronic structure calculations, classical and quantum molecular dynamics.

Pressure possesses perhaps the greatest range of all the physical variables – 60 orders of magnitude separate the pressure in the remotest vacuum of space from that found at the centre of a neutron star. The centre of the Earth is at a pressure of 350GPa (3.5 million atmospheres) and more than 90% of the matter in the solar system exists at pressures above 100GPa. Pressure thus shapes the stars and planets, and fashions the continents and oceans. It can convert everyday liquids into spectacular crystals and turn common gases such as O2 into exotic metals. And it can convert coal into diamonds. Today, the maximum static pressure obtainable in the laboratory is several million atmospheres, while dynamic pressures as high as 1014 atmospheres have been created in thermonuclear explosions (such projects do NOT, however, form part of our PhD programme!). The pressure range presently accessible in the laboratory now approaches a remarkable 30 orders of magnitude.

Over the past 15-20 years, the condensed matter physics group of The University of Edinburgh has come to prominence for world-leading structural research at high-pressures. The physical properties of materials depend strongly on structure and interatomic distances. Since pressure can vary these distances considerably more than, say, temperature, it provides an extremely powerful means of examining the relationship between structure and properties – both towards a better fundamental understanding of the underlying phenomena and also for the improved design of applied materials. Additionally, pressure is a 'clean' variable in that it can bring about large changes in structure and properties without altering the chemical composition or thermal energy of a system. This makes high-pressure systems particularly amenable to computational study, and there is a vigorous international programme of ab initio all-electron calculations of high-pressure structural stability.

Our ability to probe the structures and properties of materials at extremes of pressure and temperature has been extended greatly by the creation of the new 7-million pound Centre for Science at Extreme Conditions (CSEC, shown in Figure 1). Using state-of-the-art in-house instrumentation, combined with the powerful x-ray and neutron facilities available at the Daresbury and Rutherford-Appleton Laboratories in Cheshire and Oxfordshire, respectively, CSEC supports a multidisciplinary approach to the study of materials at extremes of pressure and temperature, and under high electromagnetic fields, at the atomic scale. It is the only Centre of its kind in the UK, and is unique in the world in the planned scope of its science.

Most of the current research of the High-Pressure Physics group is funded by a 1.7-million pound ‘Programme Grant’ from the Engineering and Physical Sciences Research Council (EPSRC). X-ray and neutron diffraction techniques are currently tackling many of the most interesting and exciting areas of high-pressure science, and our current research comprises these two principal themes.

Neutrons are ideally suited to the study of systems containing low-Z atoms, and to studies of magnetism and complex disorder. Studies of simple molecular systems reveal a rich variety of transitions and behaviour providing fundamental insight into the physics of van der Waals, H-bond and other intermolecular interactions. The effects of pressure on magnetic ordering and on mixed molecular systems (with relevance to planetary modeling), high-pressure polymerisation and the search for new hard materials are all subjects of current activity. The discovery that liquid-liquid phase transitions are relatively common at high pressure has sparked growing interest in the structures of high-density liquids and how they relate to the crystalline state. And there is intense continuing competition to understand the most fundamental systems like very dense ice and hydrogen. Much of this is directly relevant to goals in computational research, including challenging objectives like ab initio modelling of chemical reactions and complex biological systems. In all these areas, neutron diffraction is a uniquely powerful source of structural information and can make crucial, decisive contributions.

X-rays: We are using x-ray techniques to pursue many of the most exciting areas of high-pressure physics. These areas include a wealth of remarkably complex structures in elements and simple compounds; the challenge of making direct determinations of electron density; and entirely new possibilities for studies of dynamics, critical scattering, electronic structure and magnetic scattering. Laser heating now makes it possible to study very high-temperature melt structures and to extend detailed structural knowledge to conditions approaching those of the centre of the Earth.

The movement of electron energy levels under pressure means that the electronic structures of the elements at high pressure can be very different from that observed at ambient conditions (Figure 4). This can give rise to electronic configurations unique to high-pressure states; to transitions from simple metals to complex structures with directional covalent-like bonding; to the predicted localisation of valence electrons in interstitial regions; and to enhanced superconductivity.

We have recently found that the group I, II and V elements possess complex "hotel" structures at high pressures that are unlike anything seen previously in the elements (Figure 5). A principal goal of our x-ray scattering programme is to fully investigate and understand these remarkable structures, and discover whether aspects of their complexity are retained in the molten liquid state.

We are also investigating the high-density complex structures adopted by the lanthanide elements when additional orbitals are forced to participate in bonding at extremes of pressure, and the modulated structures we have recently found in Se and Te and how their structures are related to their enhanced supersonductivity at high pressures. In addition to the elements, we are investigating simple binary systems (e.g. binary semiconductors, alkali halides) with the aim of understanding the onset of metallisation, the structures of their liquid phases, and the kinetics of their phase transitions. The different electron configurations found in the elements at high-pressure means that they have a different reactivity and chemistry to those found at ambient pressure. So another part of our x-ray programme is aimed at investigating the possible use of these pressure induced "new" elements to create novel materials with new or unusual physical properties. As well as diffraction studies, we also plan to develop measurements of critical and other diffuse scattering under pressure.

The dynamic compression of matter, whereby pressure is rapidly applied to substances by impact, explosion or illumination, plays a central role in many natural and technological systems. Impact cratering by asteroids is a well-known example, but it also occurs in medical therapies such as the removal of kidney stones, inertial confinement fusion energy and even the strike of a mantis shrimp’s claw. 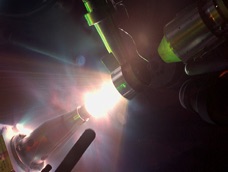 Dynamic compression is also a primary technique to study the properties of matter under extreme pressure, density and temperature. In dynamic compression, changes in pressure travel through matter in the form of a shock wave. Although similar to a sound wave, shock waves have a very high pressure such that the highest-pressure part of the wave overruns any lower pressure part of the wave in front of it, producing a sudden jump in pressure. The conditions obtained in shocked samples can be much more extreme that those obtainable in a static compression experiment, but they last only for a period of a few nanoseconds – about the time it takes for a sound wave to travel across a tiny sample.

Modern shock-compression science began 60 years ago, when researchers found that solid iron undergoes a structural phase transition from the familiar body-centred-cubic structure to a hexagonal-close-packed structure when pressures exceeded 100,000 times that in Earth's atmosphere. Studying such phenomena at the lattice level, however, has long been limited by the lack of X-ray sources with sufficient brightness. X-ray free electron lasers (XFELs) have recently offered dynamic compression science an almost ideal X-ray source: monochromatic, micro-focussed, high-energy X-ray pulses as short as one ten-thousandth of a nanosecond. With a peak brightness one billion times higher than a synchrotron, XFELs are perfectly suited for pump–probe experiments whereby an optical laser compresses a sample followed by interrogation by the XFEL beam allowing extremely high-quality diffraction and scattering data that is totally unaffected by any smearing from atomic motion.