The group plays a major part in the UKQCD consortium, a national collaboration involving seven universities.

Quantum chromodynamics (QCD) is our description of the strong force we observe in nature, which binds elementary particles known as quarks and gluons into protons, neutrons, and similar particles which are collectively known as hadrons. The force in QCD is a quantum-mechanical generalisation of Maxwell's theory of electromagnetism. Maxwell's theory is simple in the sense that it is mathematically linear: this is due to the fact that the symmetry underlying Maxwell's theory is an abelian group. QCD is based on a non-abelian group; consequently, the theory is non-linear and much more difficult to solve.

Non-abelian gauge theories have an important property known as asymptotic freedom. This means that at very high energies, quarks and gluons behave as though the force is very weak. The converse of asymptotic freedom at high scales, is non-linear slavery at low energies: the QCD force is very strong in this regime. Lattice gauge theory performs the Feynman path integral for quantum field theory numerically, and is the only model independent tool for making predictions about field theory in the non-linear low energy regime. This work has important consequences for other areas of physics: for example, certain hadronic properties are needed to both determine fundamental constants of nature, and search for new laws of physics with collider experiments.

Much of our QCD research is performed as part of the international (US/UK/Japan) RBC-UKQCD collaboration and the QCDSF (Germany/UK) collaboration. 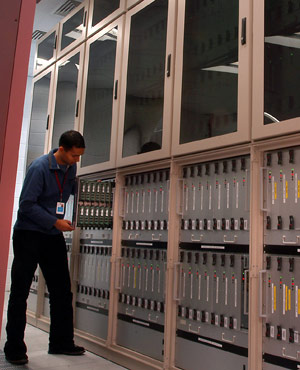 Research in lattice QCD is extremely computationally demanding, so the field is closely connected to modern chip design. Our group works at the leading edge of this area.

In 2001 the UKQCD consortium was awarded £ 6.6 M for the design, construction and installation at Edinburgh of a multi-Teraflops scale computer, QCDOC. We developed the chip for this computer in collaboration with Columbia University and IBM T J Watson research center. The computer was run in Edinburgh from 2004 until 2009 with world leading scientific impact.

In 2009 the UKQCD consortium was awarded an HPC grant by STFC to replace QCDOC with several computers, the largest of which is a next generation BlueGene prototype and will be installed in Edinburgh.

Our joint impact on supercomputer development and the fundamental structure of nuclei continues.